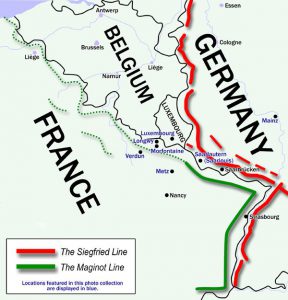 79 years ago, the Allied forces were hanging on in Europe by their fingernails on a stretch of beach near the border of France and Belgium. The blitzkrieg (Lightning War) that devastated Poland the previous September was staging a repeat performance in northern Europe all that May. During the years since the end of World War I, the military and political leaders of France pinned their defensive plans on huge, extended series of tunnels on their eastern border known as the Maginot Line. The Germans built a parallel fortress on the German side of the border that they called the Siegfried Line. The French were so convinced that the Germans would only attack on this border in this place that the heavy artillery was mounted in the cement facing Germany.

May of 1940 put an end to the French thoughts of security. On the 12th, Hitler ordered Germany’s military to commence Case Yellow, the invasion of the Netherlands, Belgium, and France. Panzer tanks, fighter aircraft, and motorcycle squads flanked the Maginot Line and raced through flat, neutral Belgium headed for the coast.

By May 14, Panzers crossed the Meuse River; on the 15th, the Netherlands surrendered; on the 20th, the Germans reached some ports on the English Channel. Stunned members of the British Expeditionary Force and French soldiers joined panicked Belgian and French refugees on the inadequate roads. This was not the way wars were fought! Events were happening too fast! The survivors were being forced into a pocket of land not yet held by the Germans. 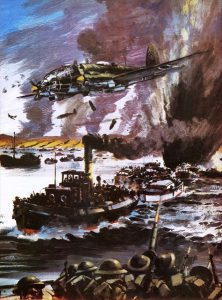 The decision was made in England to send British destroyers and transports to the port of Dunkirk, France, to hopefully evacuate 30,000 of their soldiers who were trapped on the deadly beach. Dunkirk harbor was shallow enough that the destroyers and transports were not able to land. What was needed was smaller ships to ferry troops from the beaches to the larger ships. On May 26, 1940, at 7:00 p.m., Winston Churchill ordered Operation Dynamo to begin. Fishermen, pleasure cruise boat captains,  private motor yacht owners, etc. began chugging down the Thames and coves all over southeast England to cross the Channel and rescue those that they could, so they could fight another day, perhaps on English soil.

For nine days, the owners of the 700 vessels that answered the call risked their lives to shuttle desperate Allied soldiers from the beach to the transports, beach to transports, each time going back for more. All were harassed, some injured, and some killed by strafing from the Luftwaffe fighters, torpedoes from the German subs, and artillery from the German guns just outside the Allied pocket. On May 28, the bombardment came from the north as well because on that day Belgium surrendered to the Germans. 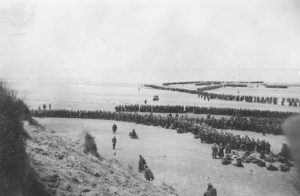 By June 4, the British Navy and the civilian fleet of 700 vessels had rescued over 10 times the original estimate, 338,000 souls. After some initial language and bias difficulties, this count included over 100,000 French soldiers. Ten days later, on June 14, German troops entered Paris. By June 22, France surrendered.

Two movies that the Bellevue University Library owns include elements of the Dunkirk rescue:

Mrs. Miniver (DVD PN1995.9,W3M77) includes impressive scenes of how the local yachtsmen got the word, and how two vessels became four, 16, a fleet. Dunkirk  (DVD PN1995.9.D866) from 2017 shows the action from the viewpoint of a British pilot, soldiers on the beach, a harbor master trying to get men off a pier into the smaller boats, and the owner of a motor launch involved with the rescue. Consider how many lives were saved because civilian individuals put themselves at risk for “King and Country”, and never doubt how much difference one willing person can make.