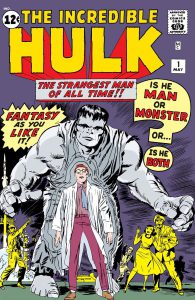 Synopsis of First Appearance: “The Coming of the Hulk”

Deep in the desert at an American army base the brilliant Dr. Bruce Banner prepares to test his new invention, the G-Bomb.  An impatient General “Thunderbolt” demands to know why there is a delay in the countdown. His daughter, Betty, attempts to calm her father own but to no avail. Banner’s assistant, Igor, is insistent that Banner share his work so another can check his calculations.  Banner responds claiming he never makes mistakes.  Igor then threatens Banner but replies he has no respect from men who think with their fists.

As the countdown begins, Banner notices a teenager in his car inside the impact zone.  Banner tells Igor to halt the countdown and grabs a jeep and races to save the teen.  But Igor is not as he seems.  He is believed to be a defector from the Soviet Union but he is actually a spy and does not call for the countdown to stop in hopes that America will lose one of its brightest nuclear physicists.  Meanwhile, Banner reaches the teen and deposits him in a trench.  Unfortunately, Banner does not escape the blast of the G-Bomb and is exposed to a massive amounts of gamma radiation.

Some hours later, Banner awakes at the army base.  The teenager, Rick Jones, had driven to the site on a dare and after the explosion transported Banner back to the base.  That evening Rick turns on radio and notices the clicks are increasing at an alarming rate and Banner transforms into a large grey figure. The grey figure orders Jones to get out his way.  He then breaks a wall while throwing off a jeep with several soldiers and walks away to hide.

The Hulk goes to Banner’s cabin with Rick in close pursuit.  Inside Igor is intensely searching for Banner’s notes.  He sees the Hulk enter the cabin and shoots at him, but to no avail. The Hulk grabs the gun and crushes it. He picks up Igor and throws him.  Rick notices a larger beaker with a folder underneath it with the title “Top Secret Report on Gamma Ray Bomb” and takes it with him.  The Hulk notices a photo of Banner and exclaims “I—I know that face!! But it is weak—soft!! I hate it! Take it away!” Rick reminds the Hulk that he is Banner.  The Hulk then remembers what happened with the accident and states “I don’t need you! I don’t need anybody! With my strength—my power—the world is mine! As for you—you are the only one who knows who I really am!” The Hulk moves to attack Rick.  At that moment the sun comes up and the Hulk reverts back to Banner.

At that moment MPs storm Banner’s cabin, arrest Igor, and take the folder, and leave.  Betty arrives to apologize for her father and suggests that Banner get some medical attention.  Banner tells Betty that he will call her later. He then informs Rick that he is afraid he will become the Hulk again at sunset.

In his cell at the military base Igor contacts another Soviet agent the deformed scientist known as the Gargoyle. Banner and Rick head into the desert in case he transforms again.  He does change into the Hulk wrecks the jeep he and Rick had been traveling in.  The Hulk decides to visit Betty not knowing that Betty is actually taking a walk that evening.  Betty runs into the Hulk and faints in his arms. Moments later the Gargoyle appears.

The Gargoyle shoots Rick and the Hulk with drugged pellets transforming both into mindless robots and orders them into a truck.  General Ross finds his frightened daughter but she says, “In spite of everything, there was something…something sad about him!!  Almost as though he was seeking…help!”  General Ross responds by saying he will hunt the monster for all eternity.

The Gargoyle takes Rick and the Hulk to his submarine transporting them to a jet heading for the USSR.  The sun comes up during the flight and Banner returns to original form.  The deformed Gargoyle begins to cry, wishing he could return to normal like Banner.  Banner treats the Gargoyle with radiation which make the Gargoyle look normal but at the cost of his super intelligence.  The Gargoyle realizes how the Soviets had used him, and to make amends he puts Banner and Rick on a jet headed for the United States.  His final act was to blow up his secret base and himself along with it.