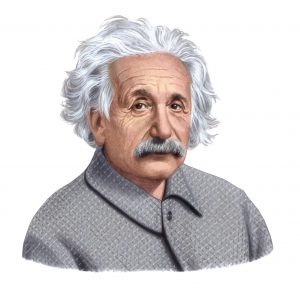 Albert Einstein is considered by many to be the greatest scientist of the twentieth century.  He was born on March 14, 1879 in Ulm, Germany and grew up in Munich. Even as a young child, Einstein excelled at math and physics, teaching himself calculus at the age of 12.  In 1905, he received his doctorate in physics from the University in Zurich and published three scientific papers which subsequently earned Einstein professorships at well-known academic institutions in Germany.  When Hitler and the Nazis party came into power in Germany in 1933, Einstein emigrated to the United States, where he worked at Princeton.  Publishing more than 300 scientific papers and more than 150 non-scientific works throughout his lifetime, Einstein was awarded the Nobel Prize in Physics.

To learn more about Albert Einstein as well as his work, click on the links below.

Albert Einstein:  The human side; glimpses from his archives by Helen Dukas.

Einstein:  A to Z by Karen C. Fox and Aries Keck

The Legacy of Einstein: A Collection of Essays in Celebration of the Year of Physics.  By S.R. Wadia.

Physics before and after Einstein by Capria Mamone