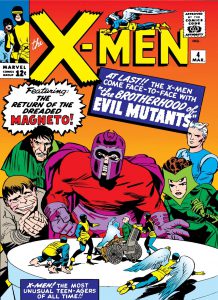 Synopsis of First Appearance: “The Brotherhood of Evil Mutants!”

While training in the X-Men’s famous Danger Room, Professor Xavier asks Marvel Girl (Jean Grey) to lift the lid off a canister with her telekinetic powers.  Doing so reveals a cake meant to celebrate the one-year anniversary of the team at the school.

Elsewhere the scene shifts to four mutants eating an evening meal, they are Mastermind, Toad, Quicksilver, and Scarlet Witch.  Mastermind attempts to impress the Scarlet Witch but she wants no part of it and her brother Quicksilver intervenes.  Magneto, the team’s leader, returns to their secret hideout near the Atlantic Ocean with a freighter he has just pilfered.  Toad informs Magneto of the fight between Quicksilver and Mastermind.  Quicksilver and the Scarlett Witch want nothing to do with his group any more.  Magneto then reminds both that they are forever in his debt.  A flash black is shown in Europe where an angry mob wanted to kill Scarlet because she accidently burned down a barn with her mutant powers.

The scene now shifts as the Brotherhood of Evil Mutants use the freighter to attack the South American country, Santo Marco.  Professor Xavier hears of Magneto’s move and contacts him through the astral plane with his incredible telepathic mutant powers.  The two debate the mutant issue.  Xavier wants mutants and mankind to live in harmony but Magneto believes the mutants are homo-superior and should subjugate all homo sapiens.  Meanwhile, Mastermind uses his powers of illusion to make the citizens of Santo Marco believe they are being invaded and frightening them.  This allows the Brotherhood to take over the nation.

Xavier and his team make their way to Santo Marco under the guise of being a professor and his students on a good will trip.  Upon arrival the X-Men get into their uniforms and engage the Brotherhood.  Mastermind tries to block the X-Men’s advance with an illusion of a wall of fire.  Professor X sees through the ruse and walks right through it, his students follow without fear.

The X-Men then head to the country’s palace not aware that it is booby trapped with a bomb.  Beast attempts to open the door but Professor perceives the danger and hurls himself to protect his team. The Brotherhood leaves Santo Marco but not before Quicksilver defuses another bomb that was intended to destroy the entire country including our merry band of mutants. Professor Xavier survives only to find his telepathic powers were diminished due to the explosion.