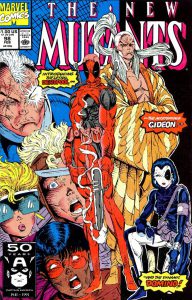 Synopsis of First Appearance:  “The Beginning of End, Pt. 1”

The story begins with the character Gideon working out at his large Colorado residence testing some programs given to him by Shaw Industries while being informed about his daily schedule.  His interest turns the De Costa stock inquiry and contacts his operative Eve to make sure all is in readiness. Gideon’s assistant Adam reassures him all will go as planned.

Forty eight hours later in the Danger Room, Cable and the mutant Cannonball focus on improving the latter’s skills. Cannonball fails and Cable reminds the team that every team needs some work.  Meanwhile in Brazil, Eve hands Emmanuel da Costa his coffee which is laced with poison, da Costa falls over dead.

New Mutants member Rictor wants to mount a rescue of fellow member Wolfsbane who is in Genosha and asks Boom-Boom for help but she blows him off.  In the library of X-Mansion, Cable is shocked to learn that there is a bounty on his head and the mercenary Deadpool is here to collect.  Deadpool explains that a fellow named Tolliver is not pleased with the outcome of their last encounter and wants Cable eliminated.  Cable and Deadpool engage in combat with Cable getting the upper hand, but Deadpool was able to place a neural net on Cable and regains the initiative.  New Mutants team members Boom-Boom, Rictor, and Sunspot race to library to help Cable.  Deadpool knocks out Rictor but he is then subdued by the mysterious Domino having placed three knives in his back.  The New Mutants notice that Cable and Domino have some kind of chemistry, or are old friends.

Cable gives Domino an update on the team explaining that several key members have left, but he has a plan in place to acquire some new recruits.  Cable also mentions that he “mailed” Deadpool back to Tolliver.  Rictor sneaks out of the mansion and leaves a note for Boom-Boom that is going to try to rescue Wolfsbane.  Sunspot is awakened by Gideon in the middle of night informing the mutant about his father’s death by heart attack.