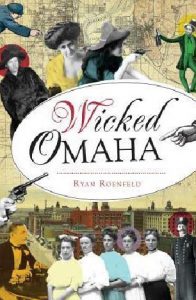 “Wicked Omaha” is a small book packed full of larger-than-life stories of the dark and wild history of Nebraska’s largest town. It starts out in the town’s relative infancy in the 1870s, during the time it first outgrew Council Bluffs across the Missouri River, and started to get a real reputation as a haven of thievery and vice. Borrowing heavily from old newspaper articles of the time, the book gives brief, individual stories of the happenings of the day, from corrupt officials, loose women, roaming drunks, crooked card games, and fleeced travelers.

It begins with explaining the broken system that allowed such lawlessness to flourish in the first place and some of its main players, before talking about the most infamous places in town. Like for instance the notorious St. Elmo’s, which was the place to go for a drink and a show, but was likely to cost you your wallet in the bargain – and in some cases even your life. Or the area of town containing the vast majority of the gambling dens and houses of ill repute known locally as Hell’s Half Acre, all of which the more upstanding citizens of the town waged a losing war to close for decades.

It then goes on to explain how later, during the 1880s-90s, the city had made some headway in cleaning up its act by having had some luck in trying to enforce the closure of saloons on Sundays, but had unfortunately added drugs to the list of vices on offer in the form of opium dens.  On top of this, the locals also had to contend with a new kingpin of vice by the name of M.F. Martin, who was known as the ‘Man-Landlady.’ Martin owned much of the property in the more disreputable part of town and rented it out for outrageous sums to those with few other options. It was not until the early 1900s that things started turning around, with Martin’s properties raided and emptied and the old St. Elmo’s closed and razed. While this unfortunately meant that certain elements of the old crooked crowd dispersed throughout the city instead of keeping to one main hotbed of vice, the book concludes that it did seem that some of the old lawlessness was dying out and gives examples of the final changes the area went through during this transition clear through to the ‘40s, when the old rough and tumble days of the early city were little more than a memory. “Wicked Omaha” is an interesting peek into Omaha’s seedy historical underbelly, and can be found in the Bellevue University Library’s General Collection and can be checked out for 21 days.