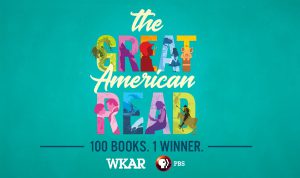 For five months in 2018, the Anne Ray Foundation supported a PBS campaign to encourage viewers to read, discuss, vote for, and cajole others to vote for their best-loved fiction book(s). The idea was introduced by Meredith Vieria on May 22, and during that PBS program the website with the 100 choices (https://www.pbs.org/the-great-american-read/vote ) was introduced.

Thursday, October 18, voting closed at midnight Pacific Time.  Between those dates, participants had the opportunity to vote a maximum of once a day. Some voted for their favorite book or series (series examples included Harry Potter, Twilight, Outlander, Chronicles of Narnia) each day, some voted for different favorites on different days.

Some participants printed out the list in May and first went through and checked off titles that they had read before. When the caliber of the books that were selected became apparent, word of the campaign spread to fellow readers and all were encouraged to vote. Some joined book clubs and spent the summer discussing the merits and pitfalls of the characters. Some checked out or bought books that had not been read before, or re-read favorites that needed to be revisited before voting.

After introducing the campaign in late May, PBS did not bombard the participants with visuals over the summer. The top 40 list out of the 100 titles was available in mid-August, to encourage those who voted during the summer to see if the ones they were backing made the cut. It also jolted those whose favorites were NOT on the current top 40 to vote.

On Tuesday, October 23, the grand finale was broadcast with all 100 books announced and ranked according to the votes they received. The finale began from #100 and worked forward, interspersing announcements of each of the top five titles after 20 had been announced. From the votes received over 5 months, the top five books/series were:

Even though the campaign officially ended in late October, those who love to read can continue to take advantage of the project. It was announced during the grand finale that the organization First Book will partner with PBS stations nationwide to distribute 350,000 books from the Great American Read list to K – 12 students. Also, the Bellevue University Library owns more than 85 of the 100 titles; any member of the Bellevue University community can check any of them out for at least 21 days. For those that our Library does not own, any member of the Bellevue University community can request those titles through interlibrary loan. If you are one of our distance learners and are not able to come to the Library in person, contact our reference staff at library@bellevue.edu to request which book you want to have sent to you by the Outreach or Interlibrary loan staff.  This campaign was a springboard for discussion and debate between booklovers throughout the nation. Thank you to all who participated in The Great American Read!