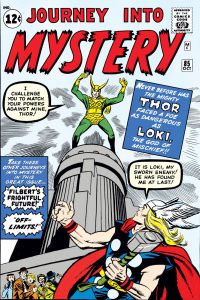 Profession: God of Lies and Mischief, God of Evil

Synopsis of First Appearance: “Trapped by Loki, the God of Mischief”

In Asgard, the trickster god Loki has trapped in tree for eons. Odin placed him there and will not allow him to leave until someone sheds a tear for the God of Mischief.  Loki uses his ability to make the tree loose one of its leaves which falls in Heimdall’s eye forcing out a tear.  Now free again, Loki seeks revenge on half-brother, Thor, by using magic to link with Thor’s hammer to locate him.  Destination: New York City on Earth.

Loki arrives on Earth and disguises himself as common mortal and heads for a hospital where Thor is entertaining sick children. Discovering that his half-brother has left the hospital, Loki uses his magic to draw Thor out of the millions living in the city. Loki turns the people on the street into negative images causing chaos, Donald Blake notices the panic and slims away from Jane Foster and transforms into Thor to deal with the crisis.  Using his hammer’s magic, he returns the populace to their proper selves.  In the midst of praise from those on street, Loki reveals himself to Thor.

Loki tricks Thor by hypnotizing him and orders that he hand him his magic hammer over. But Thor refuses by the will of Odin.  Thor will not give up his hammer, even after multiple requests.  Loki is forced to create a duplicate of Thor convincing the real Thor to hand the hammer to the duplicate.  The duplicate is then ordered to go to the zoo release the animals residing there.  After sixty seconds away from his hammer Thor returns to his Donald Blake form, which surprises Loki.  Blake, now free of Loki’s control, races to where his hammer has landed.  Getting through a number of people Blake grabs the hammer and transforms into Thor once more.  Loki attempts to escape using a flock of birds as cover, but Thor follows which results in a battle between the two the two gods across the city.  Loki attempts an escape by transforming animated statue of Pegasus.

Thor traps Loki in a pipe and knocks him off Pegasus forcing Loki to wash out into the bay. Thor apprehends Loki and takes him to the top the Empire State Building and using his magic hammer to hurl Loki to Asgard to await the judgment/punishment of Odin.  Thor transforms back to Donald Blake and rejoins Jane Foster who cannot stop raving about Thor.