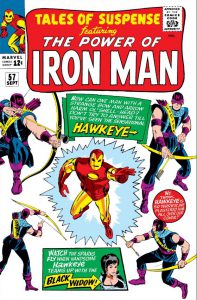 The tale begins with Happy Hogan asking Tony Stark to set him up on a date with Pepper Potts. Tony attempts to persuade Pepper but she assumes that Tony is secretly asking her on a date.  Happy sees the pair together and leaves, thus Tony reluctantly agrees to a date with Pepper.

Pepper and Tony go to Coney Island because Tony does not want to go someplace more romantic. A pinwheel ride malfunctions putting the park goers at risk and forcing Tony to slip away and don his Iron Man armor.  Iron Man saves the day and receives the jubilation of those who watched his heroic actions. Meanwhile, a carnival marksman who has been sneered at by the park goers views with jealousy the adulation received given to Iron Man and plans to rectify it.

That evening the marksman, Clint Barton, utilizes his basement workshop to create a costume and customized arrow heads to become Hawkeye, the latest costumed adventurer. Hawkeye proclaims that no one will sneer at his performances ever again. Heading out into New York City later that night, Hawkeye observes a thief pilfering jewelry. The newest costumed adventurer immobilizes the thief with one of his trick arrows.  The thief is able to escape but leaves his ill-gotten goods behind.  Hawkeye goes down to inspect the jewelry only to see two law officers that immediately accuse Barton of being the partner of thief.  Hawkeye flees fearing the police officers will never believe his story. As he runs from the scene he is stopped by a car, and the driver tells Hawkeye to get in.  Hawkeye discovers that the driver is in fact the villain Black Widow.

Awestruck by her beauty, Hawkeye stays in the car as the Black Widow drives the pair to her secret hideout. Arriving at a well attired estate, Black Widow convinces Hawkeye he is just the ally she needs and leads him to lab where he can construct special arrow heads that will subdue her adversary: Iron Man.

At the Stark Industries factory Tony regrets the way he treated Pepper and resolves to ask out to a nice dinner, however, he finds that Happy has already asked Pepper to spend the evening with him and she accepted. Unbeknownst to Tony and his two closest employees, Hawkeye has been using various specialized arrowheads to sneak into the factory.  Explosive arrows finally get the Golden Avenger’s notice, and a confrontation ensues.  Hawkeye uses arrow heads that tipped with a chemical that rusts Iron Man’s armor, forcing the hero to run and remove his armor.  Hawkeye assembles the discard armor in an attempt discover technological secrets of Tony Stark.

Tony races to assemble his duplicate armor. Fully armored once more, Iron Man hears a car leaving the property.  Observing only one vehicle moving at high velocity away from the factory, the Golden Avenger hits the car with an intense blast from his power ray. Hawkeye is forced to exit the heavily damaged automobile and immediately notices that his supply of the rusting chemical has hit zero.

Iron Man once again engages Hawkeye in combat, utilizing his magnetic repulsor rays.  Hawkeye shoots an arrow that expands into nylon rope that halts Iron Man’s advance.  Hawkeye moves to a pier near LaGuardia airport where he falls in the water.  Iron Man fishes his opponent out, but turns his back on him in order to retrieve the pieces of his armor that Hawkeye had taken.  However, Hawkeye had been playing dead and hit Iron Man with demolition blast war head.  The war head reflected off Iron Man’s armor and hits Black Widow instead who was viewing the fighting from the pier. Concerned about this new potential girlfriend, Hawkeye carries her to a boat and hope to make an escape.  Iron Man gives chase but fog is rolling in and his flight mode may not be the best choice next to a very busy airport.  The fog also makes it possible for Iron Man to recognize that Hawkeye’s accomplice was in fact the Black Widow.  Returning to his factory, Stark removes his armor and slips into his civilian clothes.  He spends the rest of evening hanging out at nearby beach and waits for morning.