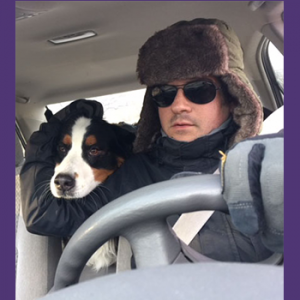 Hi Eric–I think I’ve been starting most people off with the same question: why do you work in a library? The library represents a democratic ideal: there’s something there for everyone to better themselves, so that’s a mission I can get behind. I also see libraries as places where a variety of great projects can take shape or get started, and as someone with interests ranging far and wide, I appreciate that.

I think a lot of our staff members can get behind your sentiment concerning wide-ranging interests. It’s not a surprise, but I’m continuously impressed at the richness and variety of library worker’s interests and experiences.

Speaking of which, we have to get a feel for your interests. Do you collect anything? Fossils, when I can get ’em.

What’s something you’ve ‘discovered’ recently that you want everyone to know about? Pizza. Everyone should check it out when it arrives in their town.

Favorite artists? So many, but recently I’ve been admiring the work of Anne Truitt, a sculptor.

What kind of music are you into? I first liked early rock and roll. As a small child I used to imitate Elvis for my relatives, using a tennis racket as a guitar. Then it seems like I went through a phase of recording selections from Casey Kasem’s Top 40 on cassette, and jumping around to that. Then I liked heavy metal. Through that metal door I finally found punk, which is what I was really wanting all along. I just couldn’t get a hold of any because I had no money and no connections. Through punk I found folk music, and other stuff. I think a punk aesthetic is at the heart of most of what I like. Keep in mind however, that I think some classical music is ‘punk.’

Sounds like you and I wound up at much the same place, albeit via different routes. We’ll have to compare notes sometime. Do you have a favorite book? Moby Dick, and Mad Magazine.

Awesome. You talked a little bit about your childhood; what were your experiences with libraries before working in them? My first experience going to a library that I can remember was when my dad took me on a bike in a particularly hot summer. I rode on the bar between the seat and the handlebars, and it was very uncomfortable, especially on broken pavement. The library–quiet and cool, was like an oasis after this.

What excites you most about the present or future of libraries? I think that in the future libraries will be places where creative products such as films or animations will be made, and libraries will have certain ‘house styles’ that people will associate with that library. Capabilities for filming and editing previously available only to big studios are increasingly accessible, so I see no reason why there can’t be a portion of a library that is like a small, independent studio. Growing up around Memphis I remember there was a public radio station in the main library, so this wouldn’t be unprecedented.

Alright, we’ve got a little bit of time left still, so let’s wrap up with some quick-fire questions. Where would you most like to live? Many different places; a small home in each place.

What do you look forward to doing most on the weekends? First, sleeping in. Then I can think of what else goes on the list.

What ‘virtue’ or ‘positive’ personality trait do you think is most overrated? Any of them when they’re used as an excuse for doing something horrible.

Growing up, what did you want to be? A cowboy, because of that song ‘Mammas Don’t Let Your Babies Grow Up to Be Cowboys.’

I look forward to catching you using it in everyday conversation. Favorite poem? ‘The Rime of the Ancient Mariner’ by Iron Maiden.

Hah, nice. Favorite TV series? A show I want to see more of is The Prisoner, a British television show from the late 60s. I’ve only seen a few minutes of it and it gave me a very unusual feeling.