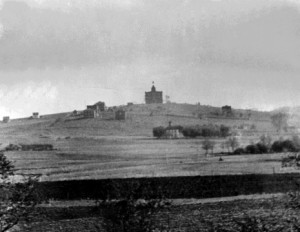 This original Bellevue College operated from 1880 to 1934, and its campus stood upon Old Elk Hill. If you’re familiar with Olde Towne Bellevue, Old Elk Hill is the gentle slope that rises north from the Central Elementary and Bellevue Mission Middle schools. The College was incorporated by the Presbyterian Synod of Nebraska, and opened its doors in 1883. Its first classes were held in the Bellevue Presbyterian Church, which still stands in Olde Towne at 2002 Franklin St, and is one of twenty sites in Sarpy County listed in the National Register of Historic Places. Classes were moved to the Old Elk Hill campus the following year, which by 1903 had expanded to nine buildings and 250 acres.

For a brief while (from 1891-1908), Bellevue College’s official name was the University of Omaha, which was a concerted effort by the College’s trustees to attract interest from Omaha in the institution. Competition from neighboring schools, World War I, and a series of disasters (most famous among which was the 1908 tornado that also severely damaged the town of Fort Crook, once located just to the west of Offutt Air Force Base) sent the college into a death spiral; from 1919-1934 the campus variously served soldiers, Church leaders, and public school students, before the trustees finally abandoned the College.

Physical traces of it still survive today, however. A granite boulder from the Old Elk Hill campus now sits on the modern Bellevue University campus. The most famous grave site in Bellevue Cemetery, Chief Big Elk’s, is actually a transplant from Old Elk Hill, where the legendary Omaha chief was originally laid to rest; his grave was moved during the construction of one of the Bellevue College buildings. And, perhaps most impressively, three of the original Bellevue College’s buildings still stand, and can be seen at 400 West 19th Avenue (College Park Apartments).

Additionally, the Bellevue University Archives houses many of the original Bellevue College’s yearbooks, and even several original photographs and postcards that depict the College campus. These items cannot be checked out, but can be viewed in the Library upon request.

Further resources include The Durham Museum’s online photo archive, which can be viewed by anyone. No better pictures of the old Bellevue College exist. Most of the information in this post was taken from Joyce Wilson’s fantastic manuscript A History of Bellevue University: The First Forty Years, which can be viewed in its entirety here.