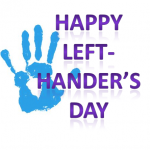 If you’re left handed like I am, you know the frustration of supplies for school or work not being made for your hands. The scissors won’t cut right, the spiral notebooks’ binding is in the way, and you just can’t seem to make the mouse agree with you. I can’t even cook at the same time my mother does because the handles hit each other. Well, have no fear, tomorrow is Left-handers Day where lefties can inform people of how frustrating this is.

There’s even a website for the holiday itself http://www.lefthandersday.com/. Started in 1976 on August 13th, it became a way to bring attention to the struggles that left-handed people go through. While celebrated for years, it was officially proclaimed a holiday August 13th, 1996.

About 10-12% of the population is left-handed. Lefties have been around since ancient times and it doesn’t seem like they’ll go away or increase in number. Women are more likely to be lefties as well.

It’d be easy to say that the way you write has no impact on how your personality is but it’s not true. If you’re left-handed you’re more likely to be creative due to how you process things. Authors, television stars, singers, etc. are in good company in Hollywood. Tim Allen, Lewis Carroll, Jimi Hendrix, and many other famous people are/were left-handed.

There aren’t many good things about lefties from the past. Left comes from lyft, an Anglo-Saxon word meaning weak or broken. Sinister was usually what lefties were called and basically you were marked by evil if you were left-handed.

A few random facts that I thought were interesting:

These facts are no where near the entirety of what I found while researching more about lefties. Still, it’s fun to learn a bit more about the ways people react to those who write differently. Use this post to give your right-handed friends a bit more insight on Left-handers Day.

Never fear, there are plenty of wonderful things about being a leftie that you can also share. Maybe share it through a song or a picture. A story if you wish.

If you want to learn more about the various things that lefties do differently, check out the links below.

2 thoughts on “You Put Your Left Hand Out”