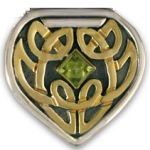 I know that St. Patrick’s Day has already passed us. It’s over and still I could fill up a pitcher of more Celtic things that I want to share. I will, instead, share my love of knot work.

Celtic knots are a cultural phenomenon that exists within wedding ceremonies, tapestries, jewelry, tattoos, etc.  These knots originated in Northern Italy and the South part of Gaul and went to Ireland in the 7th century. The original knots were broken and reconnected plaits showing.  Sailors would tie two knots together in remembrance of the love they left while at sea.

The symbolism of the knots is what I’ve always been drawn to. The artwork is beautiful and mesmerizing, but it always is interesting to see why. To see why the knots are used in representing so many things is part of the infinite loop most create. The knots are ever continuous and ever entrancing, showing how everything is connected for eternity.

There are symbols that exist for protection, family, motherhood, sisterhood, love, and power. Connections to a higher power, to another being, or to the self are the core of knot symbolism.

A common Celtic knot is the Triquetra. It was regarded a long time ago as the symbol for Maiden, Mother, and Crone. Many cultures still treat it as such. There can be just the three pointed knot or it can come with an extra binding circle around the center.

You or a loved one may possess a Claddagh, a symbol for love, loyalty, and friendship. There are two hands (friendship) holding a heart (love) with a crown (loyalty). It’s a common promise ring or engagement ring that people use.

The Aegis knot is a new one I’ve come across. It is two separate knots within a heart to create a shield. It is a symbol of protection and it’s not the only one. There are various knots out there that create the look of a shield and were used to decorate armor.

There are endless possibilities for Celtic knots. People create them and there can be multiple interpretations of one symbol. Elvish jewelry and various fantasy creations incorporate Celtic knot work. It’s a mystical air that exists around it that makes it so versatile.

The beauty of the knot work resonates within so many instances because it is all to be connected. Celtic knots to many people show a visual weaving of paths for this world. If you’d like to know more about various knots, there are several links below you can explore.