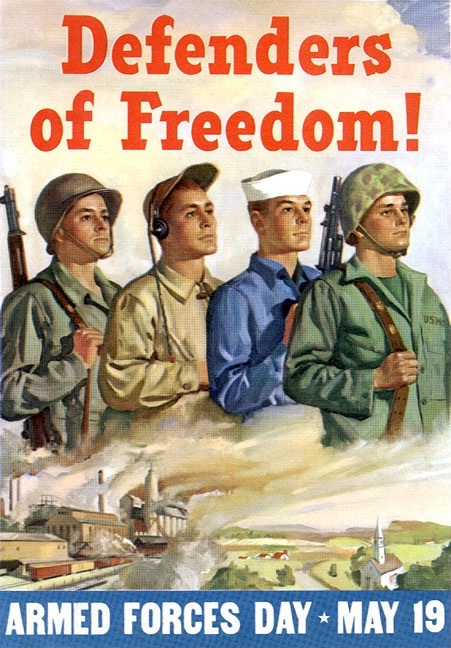 Armed Forces Day will be celebrated this Saturday, May 19th.  Many people do not know about this special day that began back on August 31, 1949 by Louis Johnson, who was the United States’ Secretary of Defense.  Armed Forces Day was created to replace separate Army, Navy and Air Force Days.  The idea came about when the armed forces unified under one department – the Department of Defense.  The Army, Navy and Air Force leagues approved of this newly formed day.  The Marine Corps League declined to drop support for Marine Corps Day but supports Armed Forces Day too.

Armed Forces Day was a day for the military to show “state-of-the-art” equipment to Americans.  It was a day to honor and acknowledge Americans in the armed forces.  Parades, open houses, receptions and air shows were held at the first Armed Forces Day. Those who are honored on this day have changed to include people who serve the Army, Navy, Marines, Air Force and Coast Guard, National Guard and Reserve units.

Offut Air Force Base here in Bellevue, NE will celebrate with the Defenders of Freedom Open House & Air Show on August 25-26th.  http://www.offuttairshow.com/.   Here are some area events to enjoy this weekend:

Let us know if you know of any other events or how you will be celebrating Armed Forces Day this year.